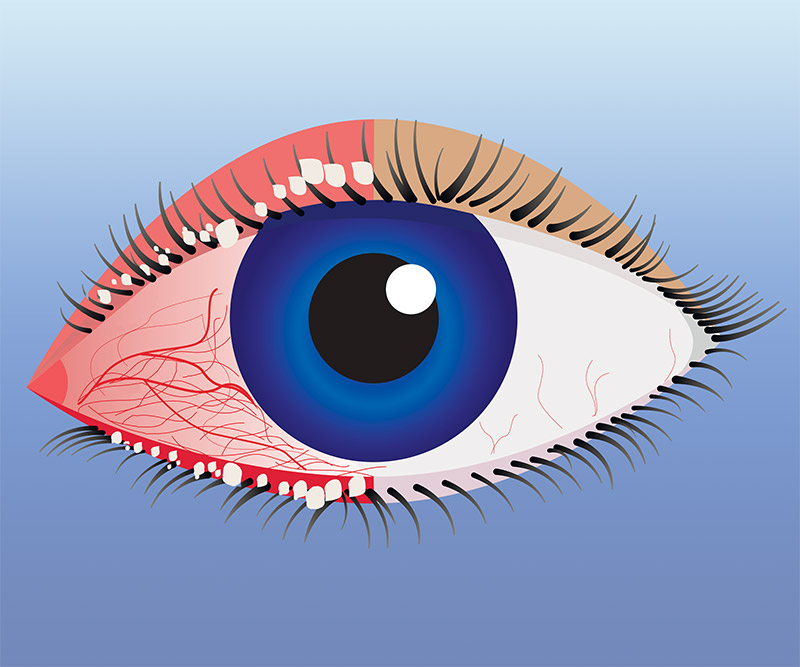 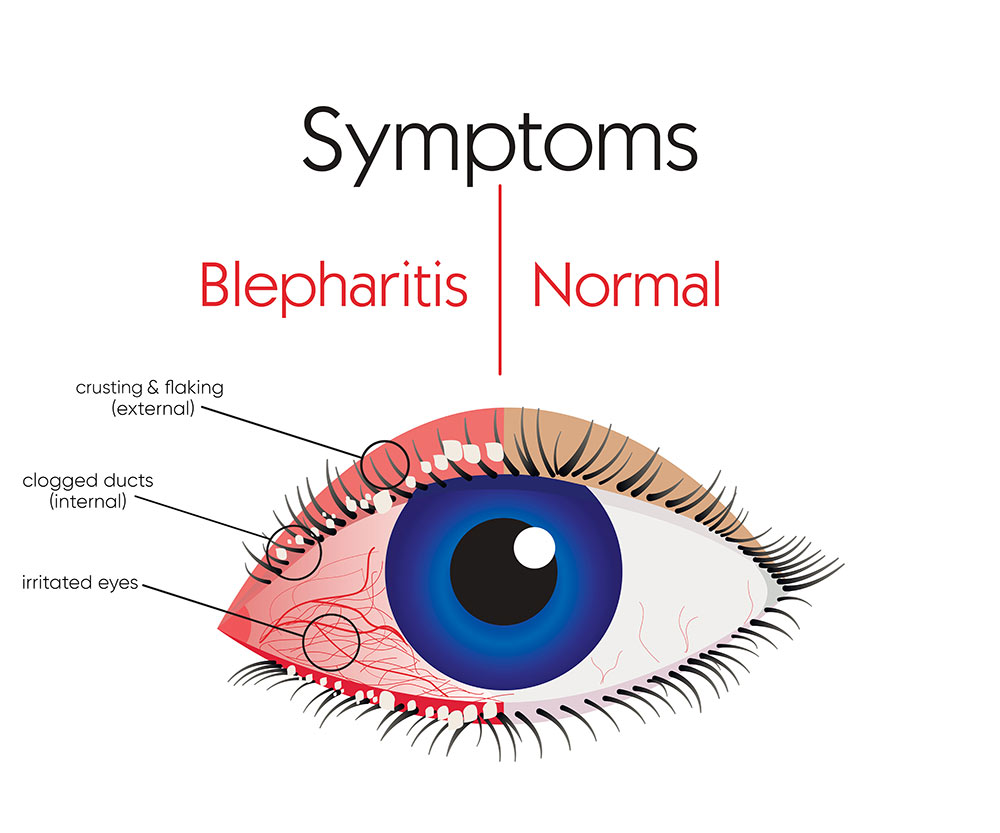 Internal blepharitis or meibomian gland disease is the more common type. In this condition, the inflamed meibomian glands in the eye produce a thick oil that disturbs the tear film and causes the lid to swell and be sticky. Think of your view through a windshield if there was suntan oil or lotion on it! It blurs the vision. Normally, the thin oil produced by the meibomian glands keeps our tear film from evaporating. The diseased, thick oil caused by blepharitis destabilizes the tear film. This condition is often confused with dry eye! The abnormally thick oil also constipates the oil ducts. The body doesn’t like this oil stuck there, resulting in inflammation and swelling of the lid.

Patients who we see here in Tampa, are frequently frustrated by the condition because they get treated with eye drops, only to find that the condition returns after the drops are stopped. Doctors get frustrated because the patients aren’t cured. It’s best to think of internal blepharitis as a chronic skin disease called ocular rosacea, so long-term strategies work best to keep patients happy.

Certain glaucoma medicines called prostaglandin analogs can also cause blepharitis. Latanoprost, Xalatan, Travatan, Lumigan, Zioptan, Rocklatan, and Vyzulta are a few of their names. They are some of the most commonly used medicines for glaucoma. They work by inciting mild inflammation to lower the pressure in the eye. However, the inflammation in the lid can be problematic. At The Eye Clinic of Florida, in Tampa, we have many other good options for getting off of these types of medicines.

While treating flare-ups with antibiotic-steroid eye drops, it’s good to start thinking long-term and get those treatments started.

Instead of treating each flare-up, there are simple things that one can do to suppress this chronic condition.

1. Chronic low-dose oral Doxycycline or Azithromycin. These two drugs are used for their anti-inflammatory effect, not their antibiotic effect.

2. MiBoFlo. This is a great option for tough cases.

For many, the thick oil secretions won’t come out on their own. I used to recommend hot compresses on the lid, but most people cannot perform them effectively. MIBO is a procedure in which the lids are warmed and the oil glands are compressed to express the blocked, thick, or dried oil that is backing things up. Think of unblocking that toothpaste tube with dried toothpaste on the end.

MiBo usually doesn’t need to be done chronically — maybe once every few years. It isn’t covered by insurance, but it’s inexpensive at $200.00 for treating all 4 lids.

Its competitors, iLUX and LipiFlow do pretty much the same thing, but cost much more: $700 to $1500 a treatment. I don’t recommend spending that much.

3) IPL (intense pulsed light). This treatment can be used for tougher cases. 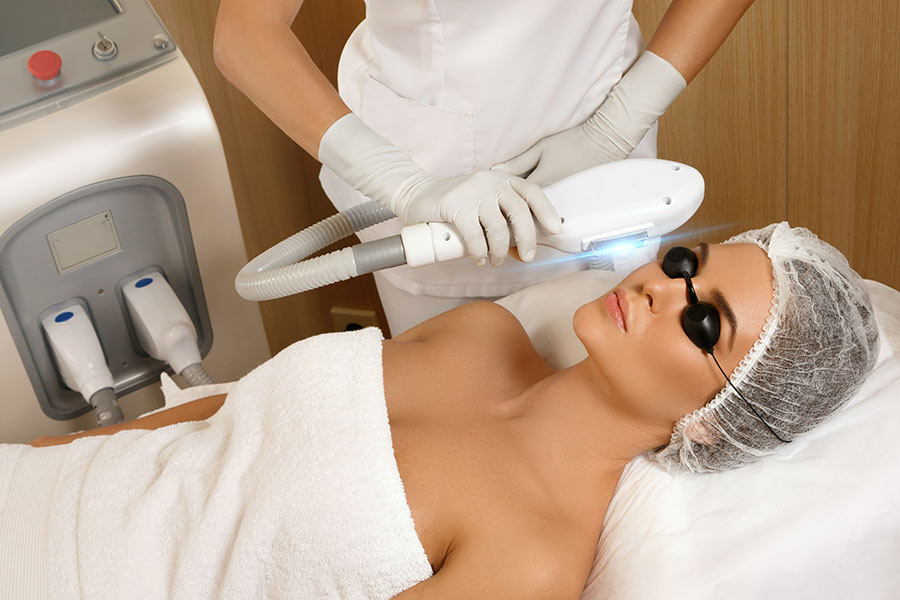 When I first heard of IPL for internal blepharitis, I was a skeptic. Over the last six years, I think it has its place. The IPL machines aren’t lasers. They just put out a very intense light burst of a certain wavelength range. They work presumably by

Its price seems to vary widely in the Tampa Bay area. We charge $450 total for the 3 monthly treatments initially used. After the first year, it usually just takes one treatment per year. There are others who charge up to $1500 for the same treatment.

It’s a good idea to avoid if you have internal blepharitis or MGD. Plugs are an older remedy used for dry eyes, but they make things worse if you have MGD. The plugs treat blocked drainage from the ocular surface. MGD is a disease of tear film oil production — not drainage. The plugs just trap the abnormal oil on the eye making things worse.

Other Types of Blepharitis:

External blepharitis is less common. We tend to see it in children and the very elderly. The lashes tend to be the most involved.

Inflammation or infection are common causes of external blepharitis. Initially, ointments and tea tree oil can help, and there are foam scrubs like Ocusoft Plus or Sterilid that work wonders. Diluted baby shampoo scrubs with a Q-tip are an older remedy used as well. Occasionally, mites can be the culprit. We sell a few kinds of treatments in our office for those rare cases.

Not all lid inflammation is blepharitis. There are a few skin cancers on the eyelid that can mimic blepharitis. A good exam with us at The Eye Clinic of Florida can aid in early detection.

Dr. Mahootchi has been a top referral doctor for dry eye and blepharitis in the Tampa Bay area for over 20 years.
For more information on blepharitis treatment or to schedule an appointment, call The Eye Clinic of Florida at (813) 538-1500.

Happy Patients Talk About Their Experience with Cataract Surgery and Dr. Mahootchi.

This place is something AWESOME. Before my aunt had cataract surgery she had trouble counting fingers right in front of her. Now she has 20/20 vision. I must admit I was skeptical at first because of just being the type of person who worry a lot about my aunt. But I'm glad we trusted the process.

Jet
Years after surgery’s seeing 20/20 the results are outstanding. Now I only visit annually for a health checkup. Thank you Dr. Mahootchi and Team!!

Stephen A. Burkhart
I had a pleasant experience at The Eye Clinic of Florida. It was my first time there, and everything went really well. Dr. Huang and all the assistants were very thorough.

Susan
I am new to the area and needed my annual eye exam. After researching several eye clinics and reading the reviews I decided to book an appointment with the eye clinic of Florida. It was a very nice experience and happy I chose them. They are friendly and knowledgeable! I highly recommend them.

Louis Carlotti
I have been going here for two years now, and both times the entire staff, from reception to nurse to doctor, were all so kind! They have a great selection of eyewear, the eye exam was made very comfortable, and again everyone was so nice. I would absolutely recommend this location to others (:

Valerie Buitrago
My experience at The Eye Clinic of Florida was outstanding. Dr. Mahootchi and his staff are extremely kind and caring. When I was in the surgical center I saw the staff cleaning the chairs and utensils whenever a patient left the area. Very impressive. I would highly recommend The Eye Clinic of Florida and Dr. Mahootchi to anyone.

Ricky Puleio
Dr. Mahootchi is A #1 in my book, for sure! He has performed a couple procedures and I couldn’t be more happy with the results. The Same Day Surgery Center is very accommodating, as well as, the staff. All of the staff are very caring people, and make sure their patients are taken care! I highly recommend The Eye Clinic of Florida!